I’ve added a host of new links to the Videos section, including a number of Toei Doga classic features that have never been released in the West and are now frightfully difficult to track down. Don’t forget that Heidi, Marco and Anne are also available with English subtitles, and I strongly urge you to watch these while you can.

As always, I strongly urge the owners of these classic films and television shows to release these titles on our shores on Blu-Ray and DVD. There is a small but dedicated following of fans who would scoop them up in a heartbeat.

In 1983, an arcade videogame called Dragon’s Lair featured fully animated movie scenes that were streamed off LaserDisc. It was a great success and spawned a mini-boom of likewise imitators. Stern Electronics, the US publisher known for many successful video and pinball games, sought to get in on the action, but lacked the resources to finance a million-dollar production of their own. Instead, they turned to Japan in search of animated movies to use.

They found two anime films based on the popular Lupin the 3rd franchise: The Mystery of Mamo and The Castle of Cagliostro. After securing the rights, Stern hired Evanston, Illinois-based production company Associated Audio Visual, Inc., who assembled action scenes from both movies into an interactive game, and the resulting product was dubbed Cliffhanger.

Like most LaserDisc videogames, Cliffhanger is an interactive movie where you move a joystick or press buttons at key moments when prompted by on-screen displays. This provides the illusion of participating in the action, by dodging enemies, attacking foes or driving a car through crowded roads. Any actual interaction is minimal, and you are really just responding to flashing lights while a movie plays in the background. For the time, it was an impressive feat, but the lack of true immersion combined with high production costs doomed the genre to extinction. By 1984, the US videogame industry was in complete collapse, including the arcades, leaving only a few publishers to survive.

Miyazaki fans will be interested to know that the dubbed segments for Cagliostro were recorded exclusively for this game and appear nowhere else. An effort was made to include these scenes in the Discotek Blu-Ray package, but were unsuccessful due to rights and contracts.

The Cagliostro dub is almost cartoonishly bad. It almost sounds like the pimply teenager from The Simpsons recorded the voices and that all the dialog was riffed on the spot, without any scripting. You can also hear the original Japanese soundtrack playing faintly in the background. The names have also been changed: Cliff (Lupin), Jeff (Jigen), Samurai (Goemon), Clarissa (Clarisse) and Count Draco (Count Cagliostro).

Today, a Cliffhanger arcade is extremely rare and expensive, but the game is playable on MAME, the arcade emulator. It remains an interesting curio from a bygone era, one that could never be allowed to happen again. Miyazaki would probably slap you upside the head if you even mentioned the subject in his presence. 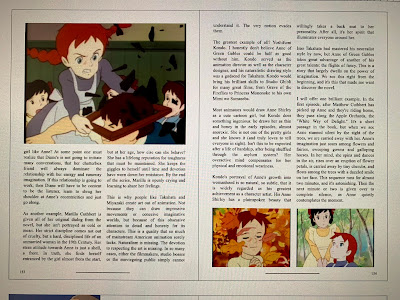 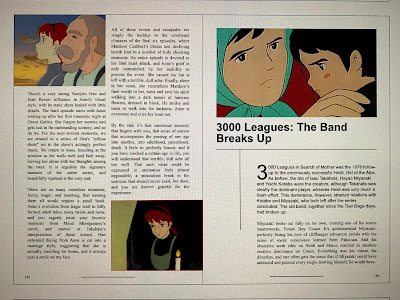 I have been promising a Studio Ghibli book for nearly as long as I’ve had a Ghibli Blog. It was always my great ambition for this ongoing study of the works of Isao Takahata and Hayao Miyazaki, and it was a project that suffered through multiple bouts of fits and starts. I was actually working on the book almost four years ago when I was hit by the first major roadblock, at which time I decided to work on a couple other book projects instead, both of which eventually became Zen Arcade and Pop Life. I made several attempts since that time, always becoming stuck and frustrated.

Thankfully, in the past couple months, I have finally managed to make headway in my vast writing project. The idea for a Ghibli book was based on the blog posts, but I have since discovered that the blog is only a reference point, a first draft towards the final script. I found myself heavily revising and rewriting most of what I had done, and most importantly, I was able to cut out the majority of essays and articles. For any artist, the most important tool is not the pen or paintbrush, but the knife.
Now, at long last, I have a solid framework on what Conversations on Ghibli should be about, what topics should be covered, and where I should focus my energies. I know where the writing should go. All that’s left is to sit down and grind out chapters.

The page layouts are the second major challenge, and it’s the issue that has held me back more than anything. For the longest time, I had resigned myself to simply publishing a text-only book, or one with only a few art assets scattered here and there, knowing that such a book would never sell. Readers and animation fans want lots of photos and illustrations, and I wasn’t confident that I could do that, or afford to hire designers to put it all together.

And then a light clicked on inside my head: I already know how to do this. I don’t need to hire anyone to put a book together. I’ve been doing this for years, not only with the art & photography ebooks, but fanzines in my teens and twenties. For some reason, my brain couldn’t grok that a print book is just another form of magazine or fanzine. It’s the same principles: page sizes, margins, gutters, bleed, text fonts, yadda yadda.

Most importantly: I don’t need Adobe InDesign to put a book together. Everything can be created on the freeware program Scribus, which is an excellent little desktop publishing program with a surprising amount of support. I’ve been watching tutorial videos this past week as a refresher course and to boost my skills.

That brings us to Conversations on Ghibli, and these first pages that I assembled, an essay on the 1979 Anne of Green Gables and the first page of an essay on Marco/3000 Leagues in Search of Mother. The pages are 7″ x 10″ with one or two columns and a number of screenshots. There will be some minor revisions here and there, but I may be close to having a solid selection of master pages to use for the book.

The main concern for now is length. I don’t know how big the final book will be, but it will blast past 100k words with ease. I don’t want a book that’s 500 pages and I’m still unsold on the idea of multiple volumes (as the pre-Ghibli volumes likely won’t sell), so we’ll see how things go.

Two of my main reference points are Antes De Mi Vecino Miyazaki, the outstanding book written by our friends Alvaro Lopez Martin and Marta Garcia Villar for Spain’s Diablo Ediciones, and The House That Trane Built, an essential biography of the Impulse jazz label by Ashley Kahn. I also have various magazine nearby for ideas, but the book size and large amount of text will mostly dictate the interior design.

Anyway, that’s the update on my Ghibli book project. It’s not anywhere close to being completed, but it’s definitely in the «alpha» stage now. Once I have the page designs and master pages nailed down, I can then focus on the writing. In addition, I also have several other book projects in various stages of completion, including Galaxy Four: Modern Art, an art ebook of acrylic and watercolor paintings from 1998-2002, and Sega Genesis: 500 Greatest Videogames, a book that details the definitive ranking of games for the classic console as chosen by players, professionals and influencers. I’m also taking photos for my next photography book, which will be called The White Album.

Right now, my schedule is as follows: Galaxy Four, then Sega Genesis, then Ghibli. But I’ll be working on everything more or less simultaneously. Stay tuned.

Update 7:04pm: I swapped in revised photos, now with better formatting, drop caps and the like. 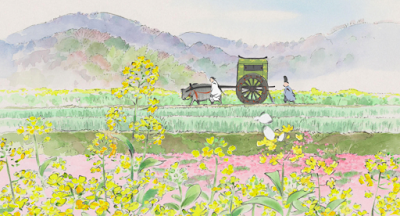 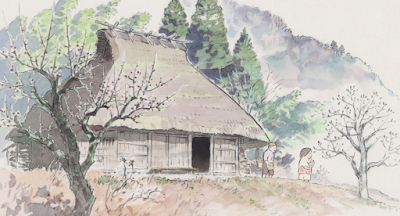 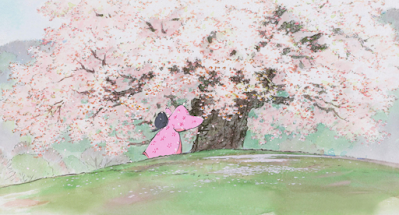 Since my last round of publishing on Ghibli Blog, I have published another round of art & photography ebooks. The newest titles are Galaxy Four: Modern Art, Fire Shark and The White Album. Each of these are optimized for viewing on smartphones and tablets, which means that everything is easy to read, watch and enjoy.

All of my art books are available exclusively on KDP Select and Kindle Unlimited. Take a moment to visit my Amazon author page and download a few titles, or read for free if you’re a KU member. As always, please share with family and friends, and always remember to write a favorable review on the Amazon product page. 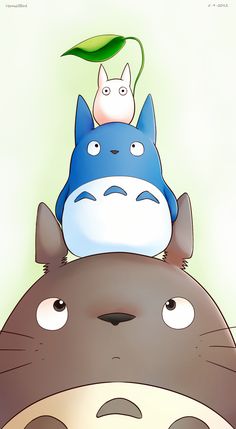 sometimes we don’t even realise how much our little support means to someone. K

The price is for one single pillow case. Handmade pillowcase, the fabric is bought in the market but not designed or printed by myself. I’m a part time seller collects fabric and make them into pillow case (if there’s copyright issue for the fabric, please contact me) 45cmx45cm ramie cotton fabric made by order, usually takes 2 days to finish the product and deliver If you want to buy inner too, please contact me. The 45cmx45cm ($5), 50cmx50cm($7) and 30cmx50cm($5) inners are available. The…

Studio Ghibli is one of the most identifiable pieces of art that has come from Japan in the last few decades. Whatever your age, Ghibli films are sure to capture your heart, youth and imagination. …

***NOW BACK – Same notepad with improved chipboard backing!*** Totoro Notepad was inspired from fond childhood memories of the amazing movie «My Neighbor Totoro». Take Totoro and friends with you to jot down all your notes, lists, and to-do’s. Every page features the same illustration of Totoro and his stomach with writing lines and his friends at the bottom. On the back of the notepad we feature a NEW, sturdy chipboard (light brown – not pictured) that improves the stability of the…

Thank you very much for all comments, I really apreciate it!! ^_^ See my other StudioGhibli fan arts! View all on my gallery ———- More of m… Totoro’s Paradise

Learn how to fold a super kawaii origami Totoro with an easy to follow video tutorial! Download 2 free printable origami papers or draw on your own face!

It was LT’s first day in Primary School last Monday. I had no plans for a charaben, but I managed to finish off all my household chores for …